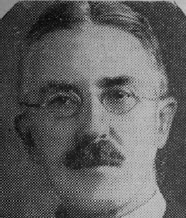 The Rev. Alexander MacInnes after successful Ministries at Markinch, Fifeshire and Rose Street, Glasgow became Minister of this Church in  December 1908, a few months after the formation of the congregation. He was the first Minister of Cardonald United Free Church and served faithfully for 11 years in the new and growing Church,

Increasing the congregation from 74 members to 248 in his early Ministry. Mr. MacInnes was an able and thoughtful preacher of a cheerful good nature. He was held in high esteem, especially by the younger people of the Church.

During the 1914-18 war Mr. MacInnes served as part time Chaplain under the Churches Army and Navy Chaplains Committee and eventually tendered his resignation in 1919 to serve as a regular Army Chaplain. In 1922 he was called to St.David’s Church, George’s Cross. He returned to Cardonald to take part in the ceremony of laying the memorial stone of our new Church.

He died at Fossoway, Kinross at the age of 60.