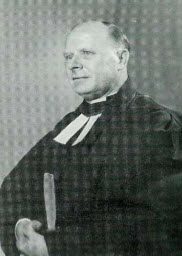 Our third minister, Rev J Stewart Pyper was inducted in October 1959 and remained with us for 11 happy years.

Mr Pyper was an Edinburgh man, brought up and educated in Glasgow.

He was an accountant in Rolls Royce from which he left to study divinity at Glasgow University , during which time he served as a student assistant to the White Memorial Church, Paisley Road West.

After graduation, he served for a short time in Drumchapel Parish Church before accepting a call to the Allan Church, Bannockburn.

Eight years later, he accepted the call to Hillington Park. He proved to be a very popular preacher and Minister and the communion roll increased to 1184 members in 1967 and six additional elders were ordained to serve with the increase in members.

Mr Pyper was insistent on Parish visitation and after a census of the Parish, a visitation was undertaken with the purpose of visiting every house in the Parish.

In 1970, to everyone’s surprise, Mr Pyper accepted a call to St George’s Greenock, there he remained until he retired from parish ministry.