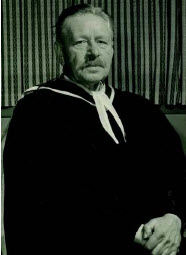 Our second Minister, Rev John Scorgie, came from Alloa, and was ordained and inducted as Minster of the Church on the 6th November, 1919

This thoughtful, gentle man ministered to our congregation for 40 years. Starting with a communion roll of about 300 he was to see the communicants increase to 900 by 1959.

In the 5th year of his ministry he saw the completion of our present church building. He guided the Kirk Session and the Congregation through the 1929 Union of the Church of Scotland and the United Free Church of Scotland, resulting in the birth of Hillington Park Church, Cardonald.

He ministered faithfully and anxiously to the congregation during the troubled war years 1939-45.

Mrs. Scorgie survived him by 8 years.