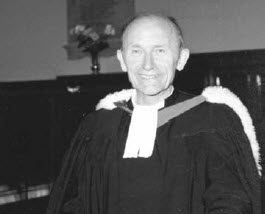 Mr. Anderson succeeded Mr. Pyper in 1971. He was our fourth Minister and ministered to us for 12 years.

He was born in Glasgow and educated at Glasgow Academy and Rugby school. He served in the Royal Navy during the war, and graduated later from Oxford University and subsequently at St. Andrews where he studied Divinity.

He married Katherine Annabella Biggar in 1950, and in 1954 they journeyed to India where he worked for the United Church of North India and West Pakistan.

They returned to Scotland in 1971 and he was inducted in Hillington Park on 15th April, that year. Given his evangelical enthusiasm it was no surprise that he pursued a regular congregational visiting programme and under his ministry several parish visitations were organized. He was interested in people and their motives and delighted in one to one conversations.

There was always open hospitality at the Manse where many district visitations and committee meetings were held. In 1983, for family health reasons, the family left for the drier climate of southern England. He continued his ministry in London with the United Reform Church. In 1990 he retired to Cambridge, but not from preaching as he continued to preach in the surrounding village churches.

He died in October 2002 after two severe illnesses.