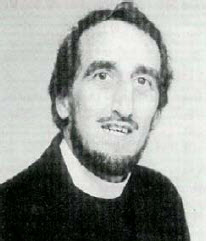 Morris Coull succeeded Mr Anderson in Hillington Park in 1983. Both he and his wife Ann were brought up in Cardonald and their children Charles and Katie spent their youthful yearsin this corner of Glasgow.

Mr Coull was a commanding figure in the pulpit from which his sermons were delivered in a strong, clear voice.

He was led to develop a Healing Group and introduced a monthly Christian Healing service from which many folk found blessing and comfort.

He organised pre-visitation courses for a successful Parish visitation and was responsible for us being gifted the Dawson carvings and furniture from Newark Parish Church in Port Glasgow.

To accommodate this, the Chancel area was widened, choir stall and pulpit removed, and the new pulpit was placed off centre to the right.

With a touch of a stage actor somewhere in his genes, he played a prominent part in the production and the leading role in the famous play “A Man For All Seasons” by Robert Bolt.

This was played to capacity audiences in the Church. He left us in 1996 to accept a call to Allen Park South linked with the Church of the Holy Rude, Stirling.

After a successful Ministry he retired from Parish Ministry in 2007. He and Ann now live in Largs, and are the proud grandparents of three grand children.