In April 2012, two members from Hillington Park Church set off on the long journey from Glasgow to Kampala, Uganda. The primary reason was to visit Dwelling Places which is the project supported by Hillington Park through the running and operation of the gift and card shop in Craigton, Glasgow, known as the ARK (acts of random kindness)

Dwelling Places rescue children from the streets of Kampala and take them to their transitional home where they are cleaned, fed and given warmth and are taught basic skills. Over a period of months they are given education and protection.

The aim is to eventually have the children sponsored, fostered and even in some cases adopted into stable family backgrounds. Some of the children are very vulnerable however and this year our members met a very sick young child called Israel. 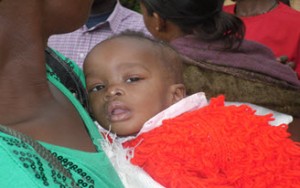 Israel was sadly the result of a rape on a young resident of Dwelling Places. She had returned to her home village for an attempt at a family reconcilliation and was attacked by a ‘friend’ of her brother. She was a young girl herself and was physically  immature resulting in a very premature undernourished and sick child. 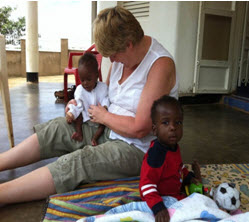 Our members were very concerned at the condition of Israel and asked for a meeting with the operating manager of Dwelling Places and asked for her prognosis. She was quite gloomy about Israel’s future for no other reason than finance. He was getting the best care both physically and spiritually that they could provide but the truth of the matter was that they were struggling to meet the financial obligation. She mentioned on a number of occasions that he was in need of special milk and when our members pursued this they were amazed to discover that this was nothing more than SMA gold top. A baby milk formula that over here in the UK is readily available to all new babies and can be purchased in any supermarket but over there is very expensive making it ‘special’.

Our members asked for a break down on the monthly outlay for Israel alone. They were told that because of his small physical size and his underlying medical needs, his milk and medication could mean an outlay of £125 – £150 per month. They immediately pledged £50 per month until December 2012 and promised that they would try in some way to raise the funds to cover the complete amount.

And so Israel’s milk project was born. 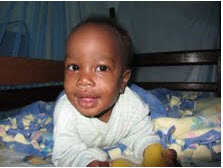 They thought, prayed and planned over the coming weeks and they came up with a suggestion that was taken to the Kirk Session of Hillington Park Church. The minister, Rev John MacGregor and the elders immediately embraced the plan and agreed to it being put to the congregation of Hillington Park. The idea was to put boxes in each of the two porches at the church and also one in the tea room. The congregation were asked to save up their pennies for the week and drop them into one of the boxes. Every penny counts was the message. The boxes were then emptied each Sunday and the money counted. Every week there was something new. We heard of people stopping reading their daily papers and putting the money in the box at the end of the week. Some emptied piggy banks and there was even two ten euro notes dropped in during the summer.

With the generosity of the members and friends of Hillington Park and with the grace of God, the news is that there has been enough to send over to Dwelling Places to cover Israel’s expenses. He has developed to a strong young man who has just celebrated his first birthday.

The pictures show Israel from the first meeting to the present and we are blessed by his improvement. This will be a story to be updated as soon as there is any new information to share but one of the really exciting things to report is that there are plans to keep the project running and to improve it. There is still some work to be done but it will be announced in the fullness of time.

It is with huge thanks to our contributers to ‘Israel’s milk’ fund. With that generosity he went from a very bleak future to one that surely has God’s touch and guidance on it.

In 2013, our Kirk Session agreed to extend the fund to make it available to any child, brought to our attention, who requires assistance and who we feel would benefit from the financial support the fund could provide.