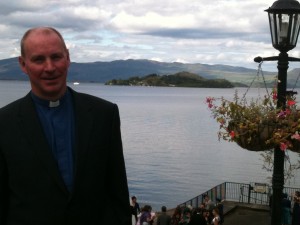 John was brought up in Tarbert,  Lochfyne. He ran his own retail business before being called to the Ministry.

He gained an honour`s degree at Glasgow University from 1993 – 97. He was ordained to the ministry on Feb 1999, after completing his probationary period at Springfield Cambridge in Bishopbriggs. He then took his first charge at Wallacewell Parish Church. On August 4th 2004 he was inducted at Hillington Park Church.

John is married to Susan and they have two grown up daughters Lindsay and Kirsty and a granddaughter Eva Elizabeth McBride.

John has a passion for preaching the gospel and he is also passionate about reaching out into the community with God`s love.

He enjoys his chaplaincy to Craigton Primary School and Rosshall Academy and he is also chaplain to Stranraer Football club.

John first visited Uganda with his family in 2006 and has had three subsequent visits, one of them being with 19 other members from HP church. He is the director of The ARK Gift and Card Shop which opened in 2007 and Dwelling Places UK was formed as a charity to support Dwelling Places in Uganda in 2008.

John loves sport and especially football and when younger had aspirations to be a professional footballer, signing for Hamilton Accies on an S Form before going to a club in Denmark. He enjoys going walking into the Arrochar hills, whenever he finds some free time.

He is keen to see Hillington Park continue to develop to be a church,  that is at the heart of the community and that is welcoming to all. He is delighted with our partnerships with Trussell Trust Food Banks, Christian Against Poverty and Redeeming Our Communities.